On Sunday November 4th 2018 Linus Torvalds released the first candidate for the 4.20 Linux kernel and it includes the upstream version of the Eideticom Peer-to-Peer DMA (p2pdma) framework! This framework is an important part of the evolution of PCIe and NVM Express Computational Storage as it will allow NVMe and other PCIe devices to move data between themselves without having to DMA via CPU memory.

In Figure 1 we illustrate the difference between a legacy DMA copy between two PCIe devices and a P2PDMA copy. 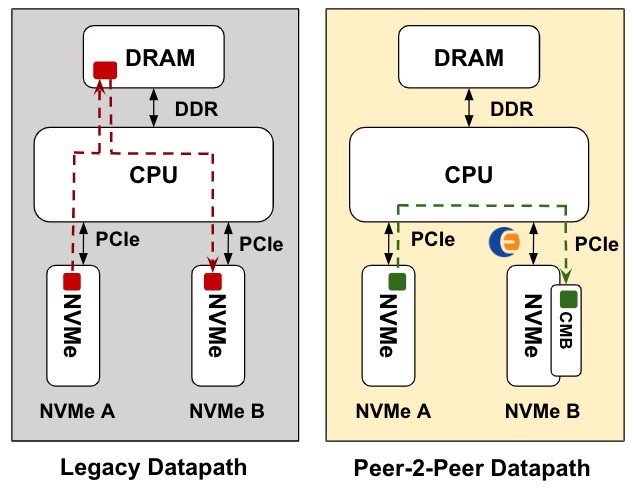 Figure 1: A legacy DMA vs a P2PDMA. The P2PDMA avoids the CPU’s memory subsystem and can avoid the CPU entirely when PCIe switches are used.

p2pdma transfers bypass CPU memory and instead uses PCIe memory provided by one (or more) of the PCIe devices in the system (e.g., NVMe Controller Memory Buffer (CMB) or PCIe BAR). A P2P capable Root Complex or PCIe switch is needed (note the AMD EPYC processors have very good p2pdma capability). This p2pdma path has not been enabled in Operating Systems (OSes) until now.

P2pdma offers the following advantages over the legacy path:

Why do NVM Express and p2pdma play well together?

NVM Express SSDs are PCIe End Points (EPs) with a very well defined interface to the host CPU. NVMe EPs have the capability to support a new optional feature called Controller Memory Buffer (CMB) and this can be used as the PCIe memory for p2pdma. In the upstream kernel any NVMe SSD with a CMB that has Read Data Support (RDS) and Write Data Support (WDS) capability will register that memory against the p2pdma framework and can be used by other PCIe EPs for DMAs.

Digging deeper into the p2pdma API

I could write a section going through the API for p2pdma but instead I can refer you to the excellent article by Marta Rybczyńska on lwn.net that covers this topic.

p2pdma currently works well on Intel and AMD CPU platforms and with additional patches we can get it up on ARM64 [1] and RISC-V [2]. We also have a simple p2p copy application which we use a lot for debug and performance testing [3] and fio also has support for using p2pdma memory via the iomap flag [4]. We also added support for NVMe models with CMBs a while back to the upstream QEMU [5].